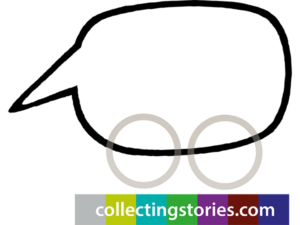 The Collecting Stories Foundation aims to realize non-commercial, culturally responsible film projects and make these available to filmmakers and / or screeners in order to provide a broad public with a substantive message. At the Collecting Stories Foundation we believe in the power of storytelling. By listening carefully to people and processing their stories with integrity to give others recognition and support in making choices or processing emotions or experiences. The Collecting Stories Foundation foundation functions as an intermediate station of stories, after which they are sent on the right track to the right target group. The strength of the foundation lies in the attention and security of the often vulnerable, open-hearted stories and their storytellers. The integrity of the narrator and the truth of the story are at the forefront at the forefront and must never fall prey to channels that are not dealt with with the utmost care.Our mission is to provide stories the stage they deserve and to reach the right people in terms of content.

The idea for the founding of the foundation came about when filmmaker Menno van Wees encountered all kinds of people with beautiful stories during his travels. He wanted, preferably at the time of the first encounter, to capture the stories in a fair and unfiltered way and translate them into short portraits. As a filmmaker, just like any other artist, you need to make beautiful work that touches people, has a deeper meaning, tells a story. To retrieve these stories and to produce or show them in a professional way, a substantial budget is required. A good filmmaker has an eye for beauty and can make beautiful films, but is sometimes unable to collect the necessary funds. And with commercial productions many wonderful stories remain in places where they will never appear. It is precisely these (often mundane) stories that surprise and fascinate viewers, offer consolation, create kinship, generate empathy and provide inspiration.

An honest and fine cooperation during the whole process, and the involvement of as many (different) people as possible is extremely important. Collecting Stories is not just about collecting and displaying interesting stories; the road to it has at least as much value.

Read more about our working method